Well if you've been absent from my blog then you aren't the only one as I've been dwelling on things and also planning on all the things.
So let's see 2019
Thanks for my run tribe and for those that stuck with me through this and I gained a new member of my tribe who is now an integral part of making sure I'm accountable and just gets me. Even if she scares me. 😁 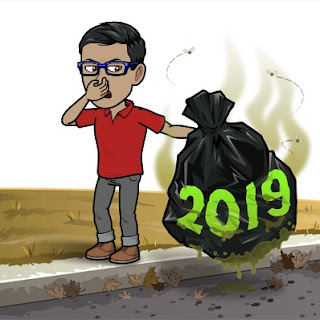 So there was talk about a Christmas vacation to try and rid ourselves of the race to try and escape the stress that is called Christmas holidays.
It was definitely a different experience, but I'm going to share what I wrote to my travel agent who found this amazing resort. It was 4/5 stars for sure.

Here is my synopsis:

Resort was absolutely amazing. We definitely would go again. In general the food hygiene and cleanliness was top notch. The entertainment was quite good. Pools were amazing. Beach was pretty small in front of the resort compared to the Bavaro which was right beside it.

The room was kept clean and we did get a room on the ground floor and it was a handicapped room which had a shower chair if needed as well, but the only issue was that because three of us were not used to a lower shower head we used the wand and we ended up with water everywhere. It was still manageable and appreciated that we got that room.
Of course we tipped well, but not sure if that really matters so much. Also the snack bar by the beach was amazing that was our go to for almost everything. We almost enjoyed that more than the main buffet because we could take stuff back to the room or to the pool if we wanted to.

I don't know if we'll ever travel so late as when we left Ottawa our flight was delayed due to a missing flight crew (stewardess) coming in from another flight that was delayed. We did arrive safely at the Punta Cana Airport, but since it was so late we followed the crowd, but we didn't realize we got sucked into a sales pitch from the local dealers as they tried to sell on excursions. It was so late that we were getting annoyed and finally this guy let us go. (Something to be aware of as you exit to get to the shuttles as I'm sure not everyone is familiar with this "diversion")

When we finally got to the gate area one lady told us we were the last to get on the shuttle so we hurried along as fast as we could, but there were no "seats" on the bus, but somehow magically some seats appeared (this bus somehow had fold down seats as part of the aisle). We had to visit 4-5 resorts before we got to ours (last one of course). By the time we arrived it was close to 10:30p so the main buffet was closed.
We finally got to our room, but it was quite the hike to building 4 for Kiera so we took it slow. Lia and I ended up going ahead to drop off our suitcases and then went back to get Kiera and Mei-Ling. By the time we got there ML was too tired to get anything, but she was quite "hangry" so we left her in the room to chill.
We ended up finding an all night eatery called Overtime which wasn't the greatest, but at that hour it was our only option.
So for future travellers to this resort going so late be prepared for very simple food like personal pizza, nacho chips w/cheese and salsa, wings and burgers and fries. and I think fish tacos. It was relatively quick and hit the spot when travelling all day/night
One thing the hotel didn't relay to us is we didn't realize the shuttle was running all night (until 2a) so we would have taken it Day 1 if we knew. But once we figured it out it was fine. As well it was really only a few minutes walk to the main buffet.
Day 2, I got up early to meet with the Air Canada rep for 9a and that was fine and we got some great tips about that, but in future I think I need to book excursions before hand if we wanted to as we didn't realize the hard sell it was at the resort and of course at the airport.

We did find the a la carte restaurants very confusing. We were told we had to reserve in the Main buffet (El Carey), but of course the way the resort is situated you had two ways of getting in. We entered the side of the buffet closest access to our building (La Tortuga), but buildings on the other side had access to the same central buffet. I didn't really understand the difference, but we found it was nicer on the Tortuga side which may be for the privilege members.
Also we finally got "caught" in the hard sell for the Welcome package so when we arrived late we didn't have any sort of "Welcome" but the package really was a time share push. Which took up a lot of our time. Luckily the girls found Mike's coffee bar adequate to get drinks and pastries for breakfast as we missed out on Day 3 for breakfast after getting a full night's rest. We finally were released and were able to get something at the snack bar, but nothing substantial.
We spent 90% of the time by the pool and of course we had one pretty much outside the room which was very convenient.
Weather was amazing and the staff was always friendly.

Christmas Eve we had to make a reservation as the buffet wasn't "open" but it was a very special themed day with three seating's and access to a lot of extra local fair which was a huge seafood bar of oyster, lobster/crab, fish, etc.
They still had the usual buffet fair, but the staff were extremely joyful and cheery on Christmas Eve. It was a nice touch with them clapping and cheering.

Christmas Day we had Japanese. Of all the a la carte's this was the only one taking reservations. The other restaurants. Steakhouse, Route 66, Maserati (Italian), Margarita (Mexican), Blue Moon (French Formal) were all on a first come first serve basis so if you weren't in line right at 6p you weren't going to get in. As well, they rotated closures between the a la carte resto's and you never knew until the morning of.
The lobby and entertainment around the main area was amazing and very interactive. Lia and I took in the Michael Jackson live theatre performance and had a great time. The actors did a great tribute to his songs.
We took in some group fun at the bowling alley/Pool but we didn't realize we needed socks one night and ended up doing pool/snooker on Christmas Eve, but went back after Japanese and did bowling. All good fun for family entertainment.

Overall, we were all impressed with the resort. Many enjoyable moments. We found our building convenient to be centrally located and access to items very easy. I believe we all felt that now that we've tried it that we would do this again, but maybe in a few years. 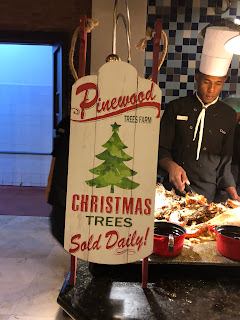 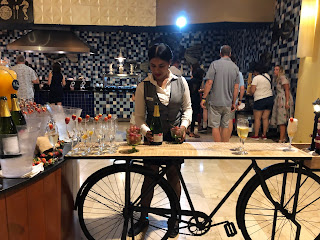 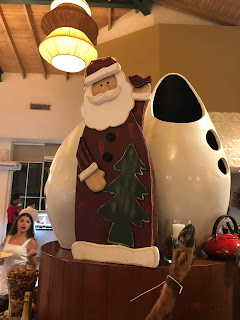 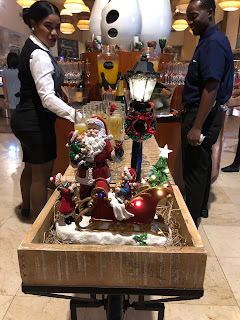 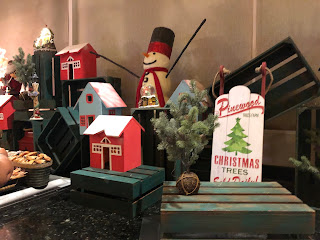 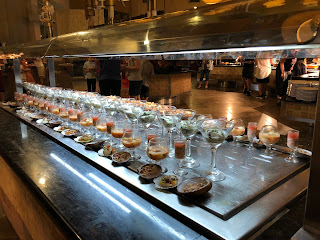 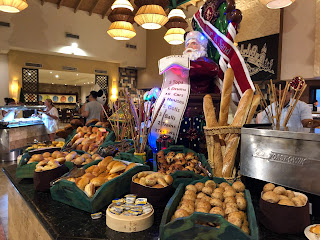 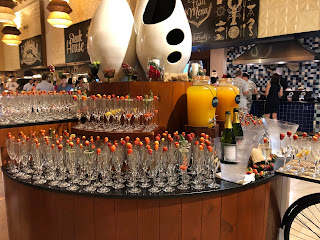 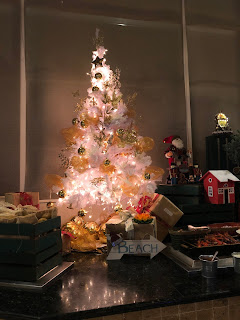 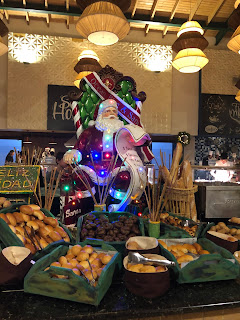 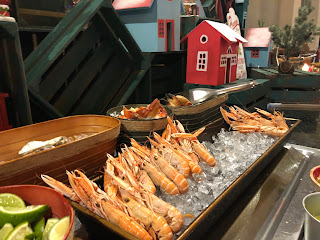 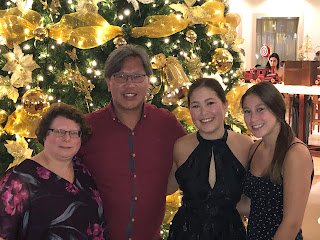 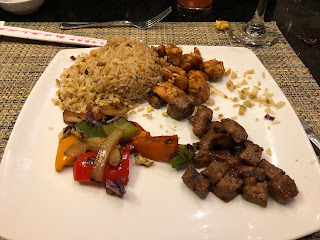 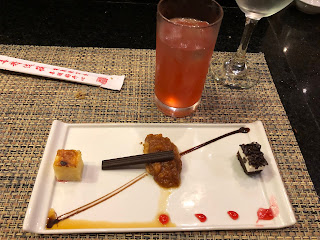 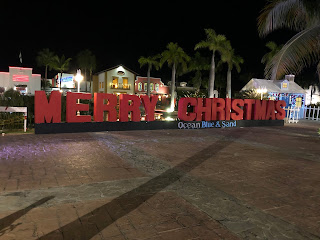 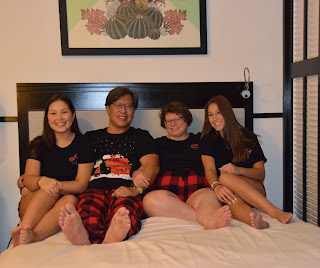 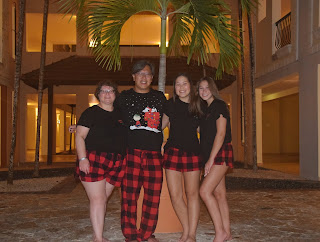 Posted by DanMan at 6:54 PM No comments:

Ablation Anniversary - One Year Ago

Exactly one year ago today my heart would be changed moving forward. After my diagnosis in June 2018 of having an arrhythmia issue I chose to have an invasive procedure done called the Ablation!
Most of you know my story by now but if you just stumbled across my blog you may want to read my very 1st post.
This past year has been quite the roller coaster ride of emotions and anxiety but I wouldn’t trade it for anything. The tribe of family & friends that have been there for me I am truly grateful.
As I sport this 14 day Holter where I will post numerous pics of wearing these electrodes aka pasties as it monitors my heart.

As I reflect on the past 12 months I can summarize the following:

3 months - the toughest part of recovery for a cardiac athlete is actually letting your body heal. Having to slow down was extremely hard and I learned that Dr Google is the worst physician

6 months - learning from the previous 3 months it was nice to get back moving and running as if I was finding my fitness. It was an amazing lead up to race weekend and to represent the Ottawa Marathon as a Team Awesome ambassador and of course supporting other runners as Xtra Mile Crew.
So heart wise mine was quite full meeting team members and helping many friends cross that finish line or just running with them even if it was just a short distance.

9 months - this was the absolute toughest block. I shall dub these the Michelle months. If you’ve followed along my social feeds where I rolled my ankle and suffered the worst sprain ever without breaking a bone. It was traumatic to say the least. BUT heart wise it somewhat helped. Weight wise it did not as I sunk into food as my comfort to cope but couldn’t get out of that funk which lead into the next three months. But one salvation was meeting my cankle buddy that helped bring me some perspective and knowing that I wasn’t alone. She reached out when no one else did. Probably because she had just come off of her own debilitating injury. So it was Cankley meets Michelle IRL (In Real Life).

Year 1 - the only saving grace was accomplishing one goal I had set out which really wasn’t a goal but to have fun but along the way. However recovery wiser I managed in:

The last few weeks have been a mix of burnout and just general anxiety. I took a break of almost three weeks of any activity feeling sorry for myself but after talking to my tribe the problem wasn’t me and I had to move on and get over it...so I did. I volunteered to do photos for ArboRace2 (some cool photos if I do say so) and then Santa photos at the Old Fashioned Christmas Fair. Then I went back to the gym and crushed a workout then started heading back with the trail running group. It was those feelings I was missing. Those calls I was making silently weren’t being heard and within me I snapped myself out of the fitness funk I was in. I think just getting back out with people that just get me and understood who I really am and what I needed. So to those that listened me in those chats thank you! You know who you are.
So as I celebrate the one year Ablation Anniversary my wisdom to you all is
Hopefully at my next update you may see me as a graduate from the Heart Institute

Some photos from the last few months that depict the roller coaster ride that goes from heart condition to fitness funk to finding fitness and the tribe that just gets me!
Happy Holidays all.