In 2017, when I did my 1st marathon I was training with my new run crew aka run buddies that talked about this brand new BQ race. It was supposed to be on a trail and starting on a slow descent from one of the mountains on an old train track that was part of the Trans-Canada railway. Of course being in the mountains you would expect nothing else but beautiful scenery and picturesque views. Cam and I didn't register or more aptly it was already sold out by the time we got to registration. It seemed like anyone that was in the running room I trained out of was there either running the marathon or the half marathon. So we decided to watch and cheer on our friends. We definitely had the FOMO happening last year!

Fast forward to the 2nd edition of MdPTdN and Cam and I are registered and along with some of our crew Nancy, Peggy, Dee and Jenny (Nancy's daughter).
Cam and I were only doing the half, while the girls were all in for the full 42.2 km.
That Saturday morning I decided to shakeout my legs and join the Bushtukah trail runners and do a simple 5K as I would be driving for a good couple of hours with Cam and would need to stretch out those muscles by the time we got there. It ended up that I met up with a fellow Team Awesome 2018 member Mireille as she lived closed by to the Nepean Sportsplex where we were running from.

After running 5K+ with the crew I managed to leave some of the peeps and went on my own down another path to make it back so I wanted to leave and get out the door by 11a as I had to get Cam along the way and then we would have the long drive to St. Jerome to get our bibs and check into the hotel.

The drive was uneventful and mostly uninteresting. If you have ever drive to Chateau Montebello or Mont Tremblant the 50 autoroute is probably the most direct. Some may have taken the ferry which would have been just as nice and scenic, but it isn't something Cam and I did. We were on a mission, get there, check in and get our race kits.
We arrived at the hotel and thanks to Waze for directing us. It was pretty easy to get to.
When we arrived at the hotel we saw a few of our run crew we knew, Vicki and her hubs and then we found Peggy and Dee who had just picked up their race kits. Those two women were doing the full marathon! Once I checked Cam and I in as this is Quebec I had to use my French and as uncomfortable as I was I managed to get my idea across and it was pretty easy to get through. I really just had to mention Nancy Kenmir's name and it was an automatic done deal 😂. The ladies were hungry and so was Cam and I so we went to Scores as it seemed like the place to go. It was ok. I had only eaten there once before and wasn't sure what to expect, but again limited french vocabulary and we managed to get our order in as I'm sure there was a lot of athletes coming into town for this race.
Oh the rooms were extremely new and modern and very nice. It was nice to be in a room with some modern decor and nothing "shady" motel like. I was impressed with this Comfort Inn.

Once we had our late lunch Nancy and Jenny arrived and we took our photo (courtesy of Jenny) and went to rest up before we headed out to dinner. I'm told I literally crashed for about 15 mins.
😊
Dinner was on the main drag close to the finish line. The resto was called Resto Pub Le Cerbere (which means Guard dog en francais)

We met up with a lot of the Ottawa contingen from Grant Crossing Running Room and some peeps from Run Ottawa. Why we didn't take a photo was beyond me?
Since I had such a late lunch Cam and I ate light, but it was still a healthy size meal. I ordered a Chicken Caesar salad and it was quite tasty. If I were Chef Ramsay I would not be super impressed, but we're not in one of his Michelin restaurants so it was a salad and it was balanced nutrition. 😜

It was back to the hotel for some shut eye and normally for me it is almost impossible to sleep on race-mas eve. But first we or least I needed to plan on what to wear so the big weather watch called for cooler temps of a high of +3 and of course the "feels like -9c" to start was more than enough to say time to wear the leggings.

Cam on the other hand was out by 10p-ish and man he snores as much as I do LOL. 😜
He laid out his gear and he was just as unsure as I was.

Eventually I drifted off sometime around 11ish, but I don't recall as the TV was on and I wasn't paying much attention and just passed out when it was time.

Somehow 5am came too damn early. I went had my shower and got ready. I stuck my contacts in as I didn't want foggy lenses running with all the layers.
Once we got all geared up it was time to head out to the buses. Something new this year (apparently) was this wrist band policy where if you didn't have autobus on your bib and your bracelet then you were not allowed on the bus. Also any damage on the bracelet you were not allowed on the bus so you pretty much had to follow all the rules to get on the many buses. The drive up was about 20 mins, but we got onto the 5th bus. Last bus for the half was at 6:30a we got there at 6:20a! We didn't have to start from our 3rd corral until 8:17a
Once we all were settled we went to our halfway point and we had to wait for about 1.5 hours before our wave started.

The one lone building was the only one heated, but there were several tents for shelter, but sadly not heated. I hid in the building while the RR crew and some others hid with me who I had no idea if I knew. I did see Sindy Hooper, but we were so crammed that it was impossible to say hi. I did bump into Joe Watters and we chatted and wished each other luck. We went up to the start line which was a nice light jog up the hill and discovered thanks to Cam that the tent was heated at the start. Bonus! So rather than be crammed in a building let's all cram inside a big white tent with a heat blower!

It was almost race time as the other two waves were pretty much gone so we all decided well who am I kidding it was gimpy Cam, Afib Asian Dan and Tony all in the 3rd corral. Oh and I saw my coworker Serge who was running his longest distance ever in his half marathon. 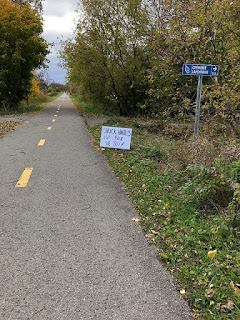 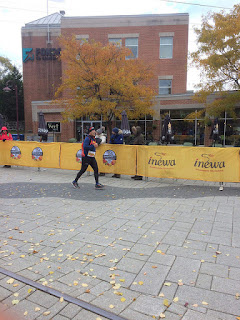 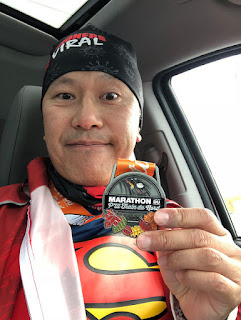 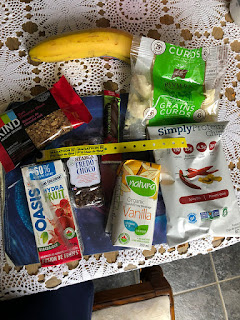 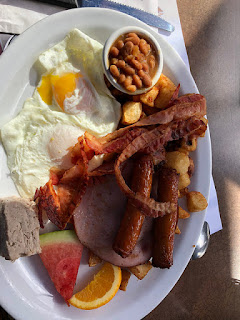 Here are the photos I took along the route! A couple from Cam also included.

Race recap by photos are just as easy as words as a lot of the event was pretty self explanatory. I wish I took more photos, but it was too cool and I wanted to stick to my plan and keep a consistent and continuous pace which I held for about 17K. Once I hit the pavement it was a tough adjustment for me for some reason. I really don't know as I guess the crushed gravel to groomed pavement was harder than I thought, but overall I finished and in a slightly better time than Army Run. Of course I had to pull back a few times, but still kept a jog pace going as the ticker was being a pain.
I'm happy with this race, but definitely there were some parts where cheering would have been great to keep you motivated to go as I know in the early parts it was hard not to speed up from all the encouragement. I wish I had budgeted time with the music as I generally don't but it was nice to have something.
But it was all for the bling!

Finish Line Video
Until the next time PTDN, but maybe not. Too many rules and very limited options if you have injuries and even if you defer there is no guarantee that you can defer the entry to next year, but definitely not an easy race if you don't have the training in.