Again and as far as I know I am still in normal sinus rhythm (NSR). Since I won't be getting my last Holter until December and of course with "Michelle" the cankle that slowed down my entire summer of training and activities this was a huge benefit to being off.
Other than the Wiggle Waggle Furry Fun Run of 2K I didn't do much in September. I did some of the Interval Return to Running program with bouts of 3 min run/ 1 min walk. But I focused in the month of September and October to work on my stamina and endurance at OrangeTheory Fitness. After all I paid for it and the folks at Kanata South were more than willing to hold my membership until I'm better. I think for the last 8-9 sessions and I tried the treadmill running once and I lasted one block as Michelle wasn't quite ready so back to the stationary bike I went. Not a bad thing, but I also took out my road bike a couple of times and I'm enjoying the cycling. It is easier on the heart and if I plan to work on the cycling over the winter then this would a huge benefit in the off season of running. Yes off season, but I'll touch on that more a bit later. For now I respect the workout and of course being mindful of my heart and being reminded that it is still healing and if I don't want any more episodes I just watch the heart monitor and pace myself and take the breaks.

For someone who is recovering I've actually compiled a lot of running since Army Run Volunteering. Here's what I've been up to if you haven't been following along.

September 28th I participated with my friend Michelle (real person not the cankle and also not named after 😏) in the National Peace Officer's Memorial Run to commemorate those law enforcement officers that gave their lives in the line of duty. Most runners ran from Toronto Queen's Park all the way to Ottawa's Parliament Hill and to the memorial beside Parliament close to East Block.
This was only my 2nd run which was tricky. One, it was rainy/misty day so it was humid. Two, I had not really run more than 2-3K so this was going to be about 5-8K depending as I met up with the bus at the Ottawa Police Station on Elgin. I parked and waited with a couple of others, but it seemed a majority of them were meeting at the Brewer Park across from Carleton University.
Michelle came by van as she wasn't running the previous leg as she was doing the final leg which was almost 8K, but according to my Strava it ended up being 7.1, but then I ran back to the car so it was a bit more which made it 8K eventually. It was a sombre run, given the news from the previous day. However, the spirit was still there and it was a fantastic way to commemorate the peace officers. In fact Michelle told me that it wasn't just southern Ontario it was many detachments outside even as far as Northern Ontario. In fact other officers not just police, but border patrol as well.

I'm hoping if I do this again I'll be in better shape and able to go near the front as opposed to the caboose runner I've been so accustomed to.
Great day for a run and even a drive by honking by one of the work wives Heather (who confirmed later) who honked at me.

So late September early October-ish I was invited to participate by Gesine (who doesn't love this crazy ultra woman) to run part of the leg, but I wasn't sure if I could run any of it for a long distance and I considered doing some, but my confidence wasn't there. So then she said I could bike and take photos as she recalled that I took photos for Evolve Run Club with the Super Run Club. So I said sure I could do that! So I met them bright and early on October 5th and took the inaugural photo of another crazy ultra man Andre Andre. Once they started I drove and met them just around Westboro Beach to grab a quick photo and then I drove to Remic Rapids, parked and then hopped on my bike and started following them and taking photos at every opportunity I could. In fact the album is right here.
It was a fantastic day. A bit cool to start, but it was actually refreshing, but I definitely got my mileage in. In total I biked about 35K in two different legs. 25.63 K to Aviation and back to Remic and then 9.52 from the Nepean Sailing Club to the start of the SJAM.
Near the end it was quite the crew that assembled. Warm day and tired legs with an itchy photographer finger. Oh and of course the run was for WUSC Student Refugee Program.

Fast forward to October 9th where every year my workplace holds a 5K run for the Government of Canada Workplace Charitable Campaign (dang that's a long title).
This will be only like my 3rd official race of which these have all been for fun/charity. I was only up to 3 minute run and 1 minute walk and I only wanted to finish around 35-37 minutes as I've not run around the campus since before the summer so this was going to be hard. But I went with two co-workers and it was just fine. No complaints. Great day and was fun to be almost last. 😃

October 12 was to be a milestone for me, but sadly the events at the MEC Fortune Fell had changed my direction.
You all know the story by now and part of it showing up to surprise Eunice and Liisa was part closure. It was so amazing their reaction and of course just being there to cheer them on. The race was in Dundas just close to Hamilton. I had left the morning of Friday at 9:30, but didn't get into St. Catharines until after 5p. That will teach me to leave on a Friday. Should have headed out on the Thursday after work.
Now Saturday morning I knew they would be starting early, but of course I was an hour away so I left to meet them as they are getting close to 1/4 of the way and I got there I didn't realize I had to pay admission into the park. That was a bit of a surprise, but you do what you have to do to support your peeps.
I parked and it was busy in the lots so I had a bit of a hike to get to where they were, but it was easily marked so I managed to find my way. I was going to go somewhere along the loop, but I needed to get my bearings. I heard some cheering so I went towards that noise and sure enough there was a small crowd. Of course the race was many distances from 5K to the 50K. So once the majority of them had gone I went to just after the finish and I could see them just finishing their 3rd loop I tried to yell to them but I was drowned out by cow bells. So I let them head into their loop and made sure they didn't see me so I could make my way to the finish and about 100 m or so before the bag drop of nutrition. So I waited and I could see them coming and the expression on their faces was amazing. In fact they were super excited and I somehow made Eunice cry. Poor thing. Not my intention, but that was a great moment.
I pieced together some of my live photos and made a video of the moment and it was fabulous.
After I sent them off onto their next loop I stayed as long as I could before I had to head back for Grandpa Pak's bday supper.
But I did get a chance to do the loop backwards, just so I can the Ultra ladies pull of their amazing run. As usual I cheered on people as they ran by me. It was a fun day to be had and I'm glad I got to be a part of their ultra experience.

So of course if I'm headed down for a Thanksgiving weekend and found a way to get my visit in with Dad and see the ladies so it was a great visit since he was turning 91 on the Thanksgiving Monday.
Happy Birthday Ba!
As a birthday dinner we went to this place called Ma Restaurant and it was super tasty. We went there last year for his 90th so it made sense to continue the tradition!

I was all set to recover in the comfort of my home, but I got a late message from Ron from whom I've volunteered with and got to chatting at one of the events we did. I wasn't sure I wanted to do this, but after all it was a reason to actually get the legs moving and hoping to get some of those stiff joints moving. So I said sure why not. It would have been an ideal gig if there was two of me, but it would have been nice to get some photos of the runners on the NCC trails, but sadly there were four waves so I needed to get as many of the initial group shot and the runs to the three breweries within a 100 m radius of each other.
I saw many familiar faces doing this race and it was a lot of fun capturing the runners and some in some pretty hilarious costumes.
Album located here.
If you're in the West End near the high tech area. There are three breweries within a stone throws.
Also this was the inaugural edition of the West End version of the Canadian Beer Run and the downtown one was sold out. 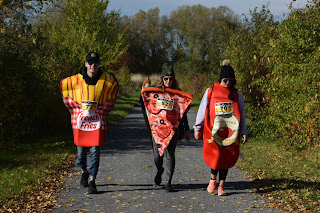 Random Stuff in the Fall

Posted by DanMan at 8:35 PM No comments: